The First Blockchain City Rankings in China Is Published

The First Blockchain City Rankings in China Is Published 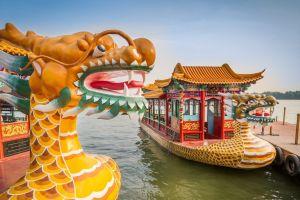 These were the findings of a special session at the China International Fair for Trade in Services, the first large-scale international economic and trade convention to be held in China since the corona-virus pandemic struck late last year.

The conference, also known as the Beijing Fair, hosted a "Global Fintech Blockchain Summit," where 83 Chinese cities were given a ranking score out of 100 on their blockchain progress.

The organization dubbed the tables the "2020 Chinese Blockchain Innovation Rankings".

According to the state-run media outlet Finance.China.com, the rankings were based on “multiple sources” and “objective data” – which it sadly did not expand upon.

The organizers ranked the cities on their blockchain R&D infrastructure, their level of blockchain industry development, the public popularity of local blockchain-powered offerings and city-level policy.

Propping up the top 50 was Jiujiang, in Jiangxi Province, which scored under 36 out of 100.

But further up the list, Beijing scored a near-perfect 99.82 at the top of the pile, with Shenzhen, the nation's de facto center of gravity for all things blockchain-related garnered a score of 91.2. The city is home of over 5,000 blockchain-related firms, per recently released figures.

Shanghai, one of East Asia's biggest business capitals, lagged behind with just under 88%.

Rounding out the top five were Hangzhou with an 86.5% score and Guangzhou with just under 77%.

The report's authors noted that Beijing and Shanghai benefited from massive natural advantages in R&D, industrial development and public awareness, a fact that allowed them to score so high.

The capital also topped the individual rankings in all but one category – local policy – where it was beaten to the top spot by Chongqing, which scored a perfect 100/100 in this field.