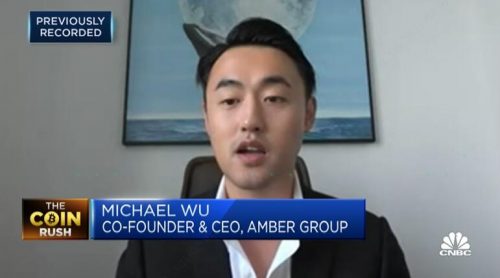 Over the past 12 years, bitcoin has gone from being a fringe asset to one adopted by mainstream investors and traditional financial institutions as they realize its digital gold properties, says Amber Group (www.ambergroup.io) co-founder and CEO, Michael Wu.

"The worst-case scenario of bitcoin is still a better form of gold. So this narrative now has finally been accepted by the mainstream financial world. As an inflation hedge, as a storage of wealth, bitcoin is simply superior," Michael said last Thursday on CNBC Street Signs Asia.

Previously, Michael was an FX trader at Morgan Stanley in Asia. He pivoted to crypto in 2017 when he founded Amber Group alongside five other finance professionals from Morgan Stanley, Goldman Sachs, and Bloomberg. Amber Group’s vision is to serve the growing crypto market of institutions and individuals. Today, the company is a market leader providing 24/7 global coverage for crypto finance solutions, including liquidity provision and asset management services.

Amid the dizzying bitcoin rally, Amber Group has seen continued inflows from institutional investors since 2019. "We've seen a lot of hedge funds… Now we start to see them in the news, but we've actually been seeing that flow since as early as 2019 or 2020," Michael added.